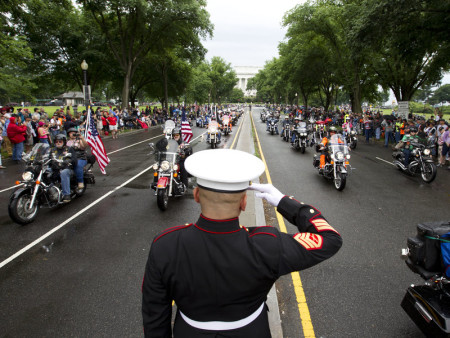 This past Memorial Day weekend, company executives, dealers and the public rode in tribute to military veterans and prisoners of war at the Rolling Thunder demonstration in Washington D.C.

Hundreds of thousands of motorcycles rolled through the streets of the nation’s capital -- flags flying -- to honor and respect all those that serve our country. Harley-Davidson has been an active supporter of Rolling Thunder since 2001.

While this may be the last national demonstration, organizers of the event say local activities will carry on and are likely to generate even greater awareness of Rolling Thunder’s mission.

As for Harley-Davidson’s involvement, Rolling Thunder may be ending, but our support for veterans will continue, as will our efforts to help ensure all military have access to the benefits of the open road.

Image credit: A U.S. Marine salutes as participants in the Rolling Thunder motorcycle rally rumble through Washington, D.C., in 2017. Organizers say the 2019 event will be the last in D.C.